Hey everyone! If you're in western Washington, you probably heard that snow is shutting down most of the Seattle area, which includes my Monday job. So I'm currently home working on the next Darkwoods novel! I've already made lots of progress - three pages longer! (Trust me, that's lots of progress compared to how I've been doing.) 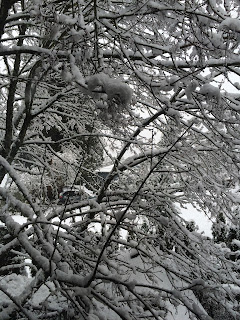 Here's a Singer for Fantasy Fans!

I'm so silly - I've been trying to think of something to post about for quite a while now, but I completely forgot about one very obvious topic!

Do you all remember last year when I posted about one of Celtic Woman's music videos? Well, the guest singer in that video is Oonagh, a German singer. I don't know why, but for some reason I didn't really investigate to see what else she sang. I Googled her, which is how I know she's German, and I vaguely remember finding a video of her singing some heavily electronic song that just wasn't my cup of tea.

Anyway, fast forward to last summer, about mid-July. I was listening to Tir na nOg on YouTube, and YouTube's Autoplay, instead of playing more Celtic Woman, sent me to one of Oonagh's videos called Orome. I think I was writing something at the time, so when I heard the opening sounds, you can imagine my surprise. But I listened to the video, thinking that "Orome" really sounded familiar, but I couldn't place it. So I scrolled through the comments on the video, and I came across one comment (from a woman with my first name, no less) explaining that Orome is one of Middle-Earth's Valar! Replies to that comment added that Oonagh sings a lot of the choruses in Tolkien's Elvish!

To put it mildly, I was thrilled. I went scouring all over the web looking for her music, and I found out that, in addition to singing about Tolkien's stories (mostly from Silmarillion), she also uses mythology, legends, and fairy tails. But from what I can tell, most of her songs are inspired by Tolkien.

She had two albums out over the summer, called "Oonagh" and "Aeria"; then in October, she released a third album called "Märchen Enden Gut", which according to Google Translate means "Fairy Tales End Well". Every album a few songs about Silmarillion characters or places, and each one also has a few songs about other stories. So, if you're into fantasy (which I assume you are because you're reading this blog), you might like Oonagh!

The problem is that her music isn't on iTunes, and it's not available for Amazon Music in America, so you'd have to get one of the CD's from Amazon, Ebay, or some similar site. I recommend getting the extended versions of each CD if you can.

If you're curious, here's her Facebook page. There's a link there to a pretty amazing website that plays excerpts from "Märchen Enden Gut".