So, about the second I logged off my last blog post, it occurred to me: Why shouldn't I go as Princess Zuryzel?

I don't know why I haven't done that before, but I haven't. So, this year, I did!

Yes, this year I dressed up as my main character, the Wraith Mouse princess. It didn't quite go as I expected, partly since I'm definitely no makeup artist, but I don't think it's too bad for my first try! 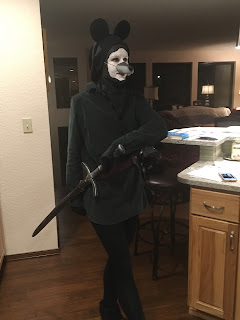 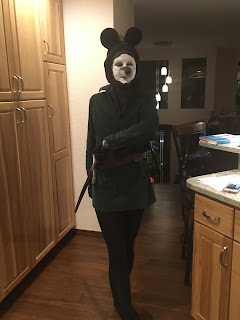 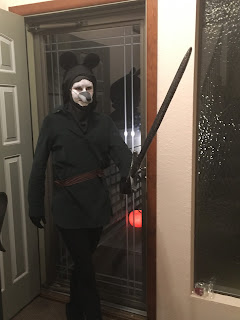 She typically wears blue, not green, but the green shirt there works too, I think. Also, she wears her sword across her back, but I couldn't make that belt work, so it went around my waist. I guess this is how she wears her sword for special occasions, when she doesn't expect to be hiking or climbing or running anywhere!

Honestly, this was a lot of fun! I also now have a lot of things to think about for Zuryzel in future books.

Happy Halloween, everyone! I hope you had a wonderful time and you let your imagination go wild!

Email ThisBlogThis!Share to TwitterShare to FacebookShare to Pinterest
Labels: Halloween

Fall is my favorite time of year, so I'm pretty happy that it's October (school notwithstanding). I'm pretty excited for Halloween, and I think instead of getting a new costume this year I'm just going to add a bunch of accessories to some of the costumes I've worn in the past.

See, that's the thing - Halloween costumes are so freaking expensive that I've only ever bought the costumes, and not the cool accessories that go with them. This year, I plan to wear one of my old costumes, but add some pretty decorations to it. So, since most of my costumes all look like medieval dresses, I'm thinking I need some kind of crown, some of those bracelet-ring combos, and some pretty face decorations.

Anyway, if you're wearing an epic Halloween costume that you're very, very excited about, post a picture to my Facebook page (if your parents are cool with that). I would really love to see what all my readers do for Halloween!

And, if you dress up as a character from Darkwoods, I'd really love to see that! ;)

In other news, I'll have a list of craft shows I'll be selling at soon. I think they're more spaced out this year, time-wise (the first one is in the middle of October), and I'm trying to visit some places I've never been yet. Once I have the complete list, I'll post it here.
Posted by Marta Stahlfeld at 6:07 PM 2 comments: