How have I only made one post about living in China before? It's not as though there isn't much to talk about...

Have you ever seen those memes about someone getting a Chinese tattoo on their arm, thinking it said something deeply profound, and someone else saying it means something like, "Chicken dinner"? I've seen enough of those to be scared of getting tattoos at all.

The thing is that Chinese people do the same thing with English words. Apparently, as long as the lettering is Roman lettering, it's cool. Here are some of my favorites.

I've seen this bumper sticker around quite a few times: 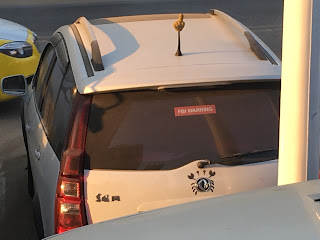 Last weekend I saw a t-shirt that had the word "Fnvention." I assume that F was supposed to be an I.

Then, when I went fabric shopping, I saw this printed on some fabric: 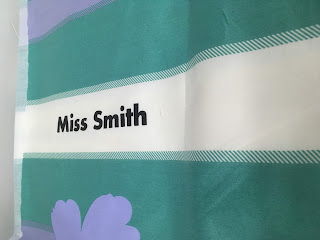 This is definitely one of those things that people all over the world do - they see something in a foreign language, think it's cool, and show it off, when in reality is just commonplace writing. Oh,good times.

It makes me smile to see that people are essentially the same in America and China.
Posted by Marta Stahlfeld at 1:00 PM