In spite of living in Washington my entire life, I've spent barely any time on the Olympic Peninsula. So this summer, my cousins Emily and Jenny and I decided that while they were visiting Washington, we were going to set a day aside and have an adventure on the Peninsula. We left the house at 6:45 AM and got back to the house at 1:45 AM - so let's just say we had a really full day!

Road trips can be a lot of fun, and you can see a lot of stuff. We wound up driving through some beautiful scenery and visiting four places filled with the glory of God's creation.

(Oh - and I'm pretty sure I broke my toe a couple of days before we did this. At least, on the day of, it was the brightest blue bruise I've ever had. The trip was still fun.)

When we left, we started by taking the ferry from near my house to a place called Southworth (not on the map, but I think it's right around Winslow). This was kind of a big deal for us, because we had been taking this same ferry to its first stop, Vashon Island (the long one right above Tacoma but stopping short of Seattle) since we were little to visit our grandpa, but we had never taken it to the second stop before. 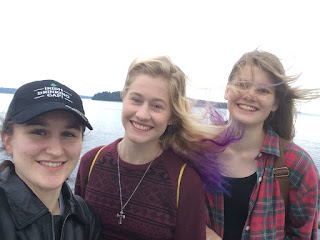 From there, we drove about two hours, mostly along the water and through some beautiful farmland, to a place called Dungeness Spit. In the map above, it's that bit of land sticking out into the Strait of Juan de Fuca just above Sequim. Dungeness Spit is basically a long spit of sand going out into the water. Supposedly it has tons of birds, but we didn't see many. 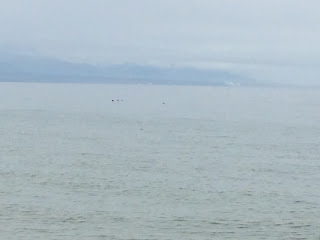 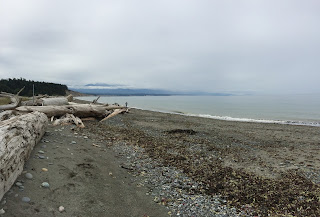 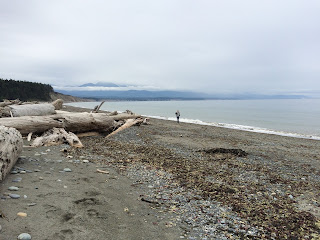 Jenny really wanted to see snow - that was her big request for our adventure. One of my coworkers had told me there was snow at Hurricane Ridge, so we made for there next. Hurricane Ridge is part of the Olympic National Park (both marked up there on the map). Along the way, we found a beautiful place to stop and take some pictures: 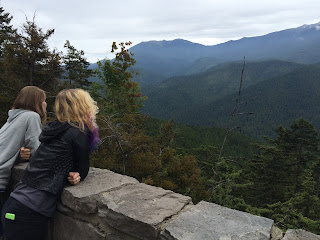 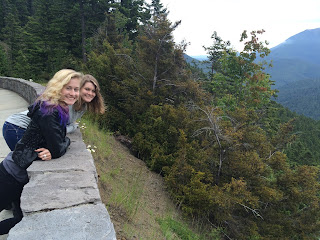 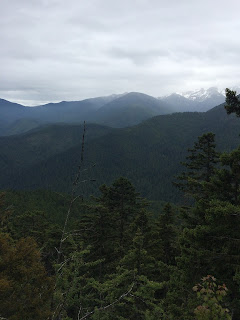 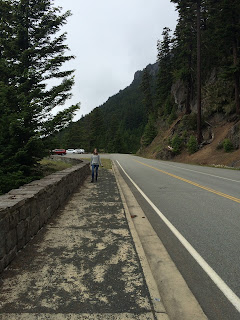 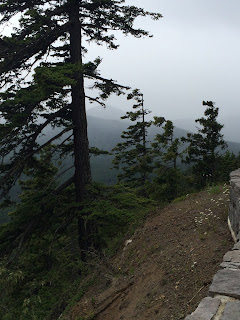 When we got to the entrance, we asked the Ranger at the entrance if she knew of any snow, and she said there was a place called Obstruction Point that still had snow. We found it on the map near Hurricane Ridge, but ended up driving right past it because we couldn't find the road to it. So we stopped at the visitor's center while Jenny (the youngest of us) ran in to ask a Ranger for directions. He told her that we couldn't see the road from the way we drove in - we had to start driving back along the way we came, and we'd see it.

Well, we saw the sign first, but we barely saw the road, because it was a very narrow gravel road. There were no railings at all along the way, and at times a really sharp drop-off to the right, down the mountainside. At one point, there was even a mini-rockfall we had to go around.

We could see another hilltop not too far in the distance, so we figured that had to be Obstruction Point. We were wrong. And wrong about the hill after that. And the one after that. At one point, Emily exclaimed, "How long is this road?"

Jenny replied, "The Ranger said it was six to seven miles long."

You can see pictures of the road here.

We kept going! After a while, Jenny suddenly said she thought she saw a beaver, so we stopped (no one was behind us) to see if we could get pictures: 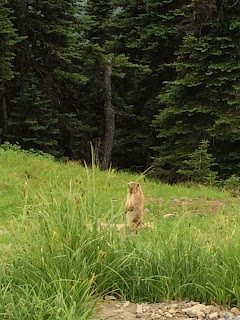 Obviously it's not a beaver, but we weren't quite sure what it was, so for the time being, we decided it was a groundhog.

We went a little further, and then we got to a place where the view made the entire drive worthwhile. We could actually look down from the mountain and see the water. (Oh, and there was snow, too!) 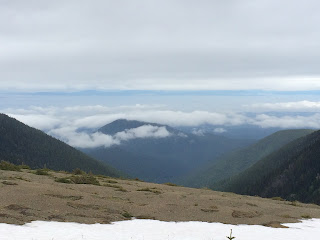 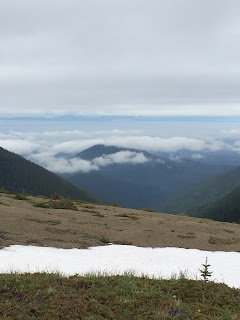 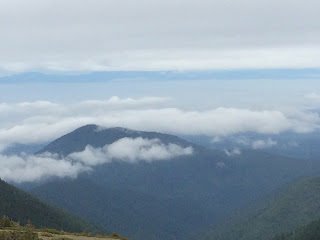 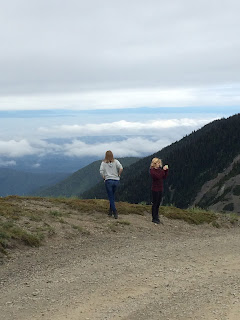 Anyway, after stopping here for a good half an hour, we decided we'd come that far and wanted to make it all the way to Obstruction Point. When we got there, we saw a sign in the parking lot with a picture of the animal we had seen earlier. It was called an Olympic marmot, and the sign warned visitors to be sure to check their engines before they left, as these animals liked to crawl into engines and chew on radiator hoses. Fortunately, our engine remained marmot-free.

From there, we went hiking a little ways. We didn't go far, because the hill was rough and my toe hurt, but Emily and Jenny did more exploring while I rested. The best part was that the trail here was still covered with snow! 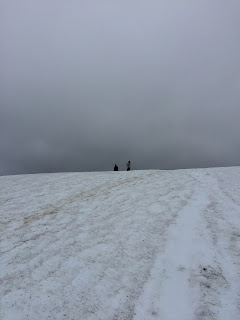 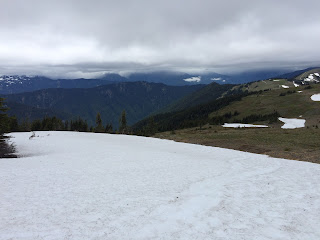 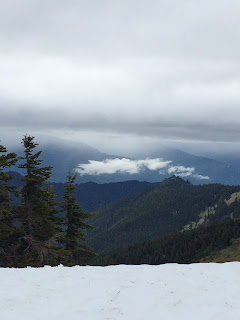 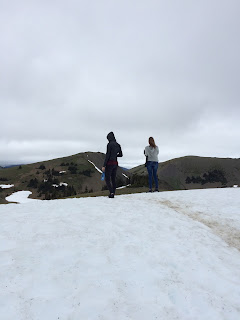 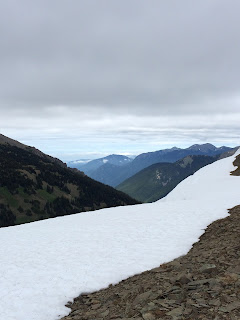 What I really wanted to see was the old growth rain forests, and one of the places we could do that was in the Hoh Rain Forest. Since it's part of the Olympic National Park, our pass for Hurricane Ridge let us in there, too. Along the way there, we found a beautiful drive along the shores of Lake Crescent (on the map above, it's that lake along Highway 101 west of Port Angeles).

But of course, on the way there, we drove through a rather famous small town:

The Hoh Rain Forest was further south of Forks, but once we got there, we were thrilled to learn the park stays open 24/7! (Which was good because we got there about 6:45 at night, if I remember correctly.) We picked the trail called the Hall of Mosses, where you get a ton of moss hanging down from the tree branches. 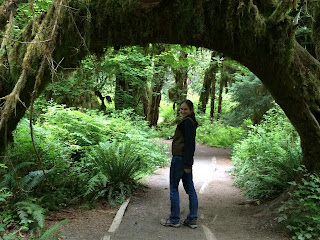 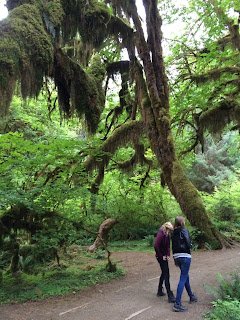 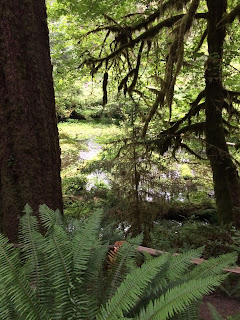 From here, we drove back to Forks and had a nice PNW dinner at one of the diners. 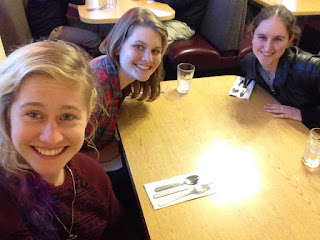 If I'm remembering correctly, we got done with dinner about 10 PM. Then we just drove straight home. This time, instead of catching a ferry, we drove across the bridge down by Tacoma and then straight up home.

By the way, Emily did her own study abroad trip in Italy, and she has a blog for it.

Posted by Marta Stahlfeld at 8:49 PM