Title kinda says it all, right?

It's been twelve years since al-Qaeda flew planes into the World Trade Center. About 3,000 people died that day. 3,000 innocent American lives. I realize it may not be politically correct to blame al-Qaeda anymore, but screw that. It was al-Qaeda, the enemies of freedom.

Something that's much less well-known is that only one year ago four Americans were killed at the American Embassy in Benghazi, Libya. The four Americans killed were Ambassador Chris Stevens, Glen Doherty, Sean Smith, and Tyrone Woods. The attack, supposedly a "spontaneous response to a YouTube video," lasted for seven hours. Let's make sure we remember both 911's - the Twin Towers and Benghazi. 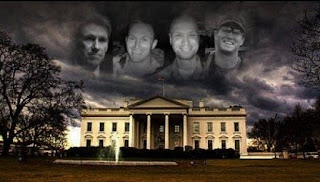 Posted by Marta Stahlfeld at 3:02 PM